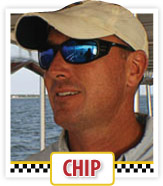 Chip Deaton, captain
Co-owner and Captain Paul McNeely Deaton III, also known as Chip, always knew he wanted to work on Charleston harbor. Even as a young boy he wanted to spend all his time on a boat. After six years in the navy and then working for three water taxi companies in Charleston, he decided to take on the Charleston Water Taxi with Scott.  To Chip the best part about his job is meeting all the different people. “I love helping the locals and visitors plan their day in Charleston, while giving them a fun and safe experience on the water.” Chip lives in the West Ashley area of Charleston with his wife Jill, sons Benjamin and Owen. 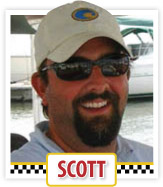 Scott Connelly, captain
Co-owner and Captain Scott Connelly worked with Chip at the Charleston Harbor Marina before the two took on the Charleston Water Taxi. Scott grew up fishing with his father and has always had a boat. Scott’s favorite time on the water is in the fall just as the sun is rising. “The water looks like a mirror and you can’t tell where the sky stops and the water starts,” he said. “The sky is a different color blue in the fall. Being able to fish on a morning like that will keep me out on the water forever.” Scott, his wife Marie, their son Marsh and daughter Abigail live in Mt. Pleasant.  For Scott, the best part of working on the Charleston Water Taxi is the people. “I love conversing with all the passengers and meeting lots of different people.”